The brief history of the research on Hungarian bow

The most important weapon of our ancestors was the bow, which has been mentioned by several contemporary sources.

Byzantine Emperor Leon the Wise VI. (886-912) describes the weapons of the Hungarians:

"The weaponry of the Hungarians is sword, leather armor, bow, lance, therefore most of them wear two weapons in battles; on their shoulders they carry lance, in their hands hold bows, and as soon as needed, they use either or the other".

Regino abbot of Lotharingia describes the Hungarians in the Chronicon:

"Trained in toils and battles, their physical power is immeasurable... they kill few with swords, but hundreds with arrows, which they shoot so skillfully from their horn bows, that it one can barely defend against their shots". 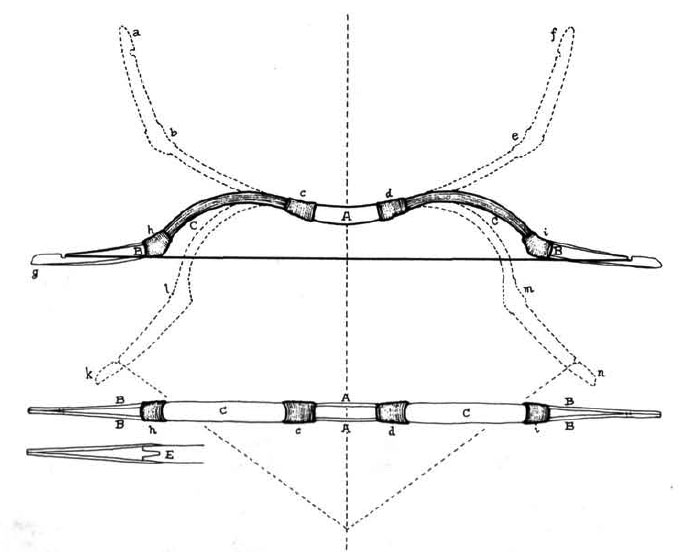 In the 1920's several 10th century graves has been explored. Besides the spurs, sabers and other findings, the archeologists found long, slim antler plates. Nobody knew what they were, until Dr. Károly Csiki Sebestyén (1876–1956, ethnographer) found out that their purpose was to strengthen the grips and ears. After the discovery it was evident that the Hungarian bow was and Asian type.

After that Cs Sebestyén tried to define the precise form of the bow, which was exceptionally difficult, since in those times they didn't make graphics of the graves, so the original positioning of the plates was not yet known. Due to this, during the reconstruction in those times he had to rely on Asian bows, still used in those times.

The writings of Cs Sebestyén has caught the interests of a teacher of the University of Agricultural Sciences in Gödöllő, Prof. Dr. Gyula Fábián (1915–1985, zoologist, hunter, experimental archaeologist, the pioneer of the Hungarian field archery and bowmaker).
By that time, he had been interested in archery for a long time, and the Hungarian Bow threw him into fever. The theoretical reconstruction of Cs Sebestyén gave an answer to the general questions, but Gyula Fábián wanted to know more. He thought that his questions can be answered through experiments only, so he decided to build the copy of the bow. Finally he built more than a dozen of bows. He found that maple fits best as the core of the bow. For the back of the bow he used deer sinew, the belly side was covered by the horn of Hungarian grey cattle and deer antlers were used for plates. Most of his results confirmed the reconstruction of Cs Sebestyén, the only difference was in the unstringed form of the bow. Fábián built much less 'reflexed' bows, thus decreasing the twisting danger of the limbs, but this way he decreased the efficiency of the bow.